Recent news reports have made it abundantly clear that US President Donald pays no regard, when considering tariffs on this and/or that from this and/or that country, to the potential impact on either US citizens in general or domestic producers using parts from those newly taxed countries.

Be clear: Tariffs are taxes – taxes too often paid, not by foreign countries or foreigners, but by American manufacturers and US consumers.

He was warned today (June 4) by members of his Republican party in Congress that they are seriously opposed to his plan to levy tariffs on all goods from Mexico “until the Mexican government stops the flow of migrants across the US’s southern border,” as The Times put it.

A good reason to suspect that if Mexican goods are hit with import tariffs by the US, their tomatoes – which “account for just over half of the U.S. tomato market,” according to the Florida Tomato Exchange – came two weeks ago (on May 22), when the trade groups representing Mexican and Florida tomato growers/marketers both issued statements concerning their future trade relationships.

First, a proposal from T=the Mexicans growers to the US Department of Commerce, which oversees imports, spoke first, proposing a renewal of the oddly-named “Tomato Suspension Agreement” based on such factors as:

[1] Mexican tomatoes are (already) imported at prices above those of US (particularly Florida’s, where the bulk of America’s commercial tomatoes are grown), and

[2] agreed proposals by Mexican growers and US border-area importers “enforce the arrival condition” of tomatoes moving north across the border, reducing the risk to importers of in-shipment damages and resultant disputes or costs. 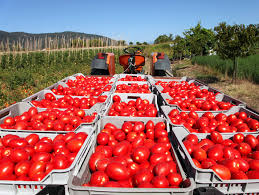 Mexican tomatoes in the field

But Both the Fresh Produce Association of the Americas’ (FPAA) President and the Florida Tomato Exchange’s (FTE) rejected Mexico’s proposals, contending, among other things, that the latter ‘dumps’ the fruit at unfairly low prices onto the American market.

In February, the US Commerce Secretary, Wilbur Ross, said that the United States would resume an anti-dumping investigation into Mexican tomatoes, withdrawing from a so-called suspension agreement that halted the anti-dumping case as long as Mexican producers sold their tomatoes above a pre-determined price. U.S. growers and lawmakers say that deal has failed.

Ross said in early February that the United States would resume an anti-dumping investigation into Mexican tomatoes, withdrawing from a so-called suspension agreement that halted the anti-dumping case as long as Mexican producers sold their tomatoes above a pre-determined price. U.S. growers and lawmakers say that deal has failed.

Last month, the US government – in the form of the Commerce Department – declared tariffs on tomatoes would go into effect this month (June). The Mexican Economy department said the country exports about $2 billion in tomatoes to the United States and supplies about half the tomatoes the U.S. consumes annually.

It said that many small- and medium-sized Mexican tomato exporters won’t be able to pay the deposits required to export. Tomatoes are Mexico’s largest agricultural export after beer and avocadoes, and tomato growing and harvesting provides about 400,000 jobs in Mexico.

But the deposits required to comply with the 17.5% U.S. tariff would amount to about $350 million, money that many Mexican producers don’t have.

The Commerce Department declaration, significantly, had no relationship with Trump’s since-then declaration he was aiming to boost the price of all Mexican imports.

Sadly, as noted above, how all this will play out, over the next few months, is anyone’s guess. But one thing is pretty sure: your home-made tomato sauce, salsa, and tomato salad, among other things, is about to cost you more. Probably well over 10-15% more, even if retailers eat some of the additional costs to them.