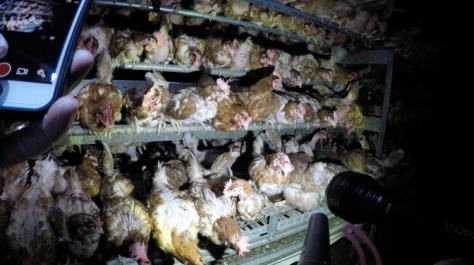 As consumer pressure has caused an increasing number of food sellers to buy, or make long-term commitments to buy, eggs from chickens not raised in cages, egg-producing farmers have turned to a system known as aviary systems. Such systems, in which barn-housed hens are crowded together outside of cages, the birds’ experience is better, but only slightly better, than their traumatic life in cages, The New York Times reported today (Oct. 21).

Their article initially focused on what investigators from Direct Action Everywhere discovered when they snuck into a barn owned by Pleasant Valley Farms, an egg producer in Farmington, Calif., and a contract egg supplier to Costco. The 783-word article went on to note how the Humane Society of the United States views aviary systems – as an alternative to battery, or caged, ones – and on the findings of researchers in Holland who ranked various types of hen housing for animal welfare on a scale of 0 to 10. They gave aviary systems a 5.8, while cages received a 0 ranking.

A video released Thursday by Direct Action Everywhere, an all-volunteer animal advocacy group,  shows dead birds on the floor and injured hens pecked by other chickens. One bird had a piece of flesh hanging off its beak.

The video focuses on a hen that Direct Action rescued and named Ella. When the organization found her in the cage-free barn, she was struggling to pull herself up and had lost most of her feathers. Her back was covered in feces.

“There were birds rotting on the floor, and there was one dead bird that seemed to have lost her head,” said Wayne Hsiung, who helped make the video for the group, which is better known as DxE. “There were birds attacking birds, and the smell was horrible.”

The egg industry has long warned that hens living cage-free in aviary systems will experience higher mortality rates and more disease. Research by the Coalition for Sustainable Egg Supply, which is financed by egg producers and food companies, found “substantially worse” levels of aggression and cannibalism in cage-free systems, also known as aviary systems, compared with caged systems. It has also found more damage to the birds’ sternums.

“Consumers have an idyllic vision of what cage-free farming looks like,” Mr. Hsiung said. “They need to be shown the truth, which is that cage-free is far from humane.”

Yet, partly in response to graphic videos and reports about the conditions of caged chickens, consumers pressured companies from McDonald’s to Walmart and Costco to turn to cage-free eggs. Those companies have rushed to promise buying only cage-free eggs in the years to come, which has pushed egg producers to invest tens of millions of dollars in aviary systems. Many animal rights activists have applauded those commitments.

[An aside: At the Walmart nearest my home, large eggs have recently sold for as little as 89¢ (eighty-nine cents) per dozen.]

Costco said in a statement that the video appeared to involve just one barn out of the many that it uses to supply the eggs sold under its Kirkland brand.

“We have reinspected the barn and other operations of this supplier, and based on these inspections and prior audits, we are comfortable with the animal welfare aspects of the operation,” the company said.

Paul Shapiro, vice president for farm animal protection at the Humane Society of the United States, said that cage-free hen housing was without a doubt better than battery cages, though not without problems.

He noted that an assessment by researchers in the Netherlands that ranked various types of hen housing for animal welfare on a scale of 0 to 10 gave aviary systems a 5.8, while cages were 0. “With companies like Costco,” he said, “it’s better to welcome them for taking the first steps rather than punish them for not taking the last step.”