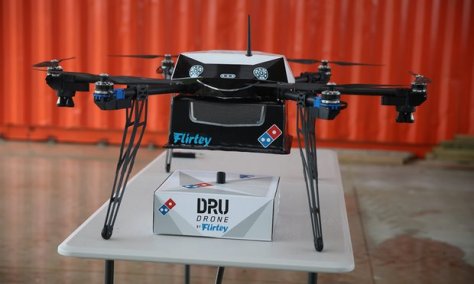 Domino’s has announced plans to start delivering pizza in New Zealand via drones by the end of this year. The company conducted a test drone delivery in Auckland on Thursday (8/25) – hopefully complying with the one thing that could stand in the way of their airborne delivery plans: A regulation stating that drones must remain in sight at all times.

While Don Meij, the chief executive of Domino’s Pizza Enterprises, has stated that his company has “always said that it doesn’t make sense to have a two-tonne machine delivering a 2kg order,” he hasn’t explained how delivery drones can be kept in sight at all times unless either “a two-tonne machine” or a walking or bike-peddling person trails the drone throughout its flight. (A ‘tonne’, according to Wikipedia, is a non-SI metric unit of mass equal to 1,000 kilograms.)

The New Zealand edition of The Guardian reported today (Thursday) that both Amazon and Google are among the companies planning to launch drone delivery services, as, apparently, is the US-based 7-Eleven convenience store chain, which last month made two deliveries via drone from a Reno, Nevada 7-Eleven store to a single residence. A company press release said both hot and cold foods – including hot coffee, donuts, a chicken sandwich, a Slurpee frozen drink and candy – were delivered before observers including company officials, representatives of Flirtey, the drone maker, and representatives of the Federal Aviation Administration (FAA), which had to sign off on both the flight, the first officially-sanctioned use of a drone in the nation’s commercial airspace, and the flight test site.

7-Eleven has not announced if or when it expects to initiate commercial drone service, but there are plenty of places it could do so: The company has stores in 18 countries, a few of which already are relaxing rules to make drone deliveries legal. In addition to New Zealand, those countries include the U.S., Australia and the U.K., where 7-Eleven has announced its intention to open stores as it pushes toward  80,000 stores by the year 2020. That announcement was made at the ACS Summit – the leading event of the U.K.’s Association of Convenience Stores – in the first quarter of 2014, but the company doesn’t seem to be any closer these days to re-investing there. (7-11 did have a presence in the U.K. in the early through the mid 1970’s, when I was editor of two magazines serving that country’s c-store field.)

After Domino’s New Zealand test flight, that country’s transport minister, Simon Bridges, said: “Our enabling laws and regulation means we have the ideal environment.” He appears to have at least temporarily lost sight of the ‘keep it in sight’ rule.

Philip Solaris, the director of drone company X-craft Enterprises, told The Guardian he sees Domino’s being hampered by that rule.

“I can’t truly see how commercially viable that idea is, because you would have to literally have somebody walking along to keep it in the line of sight, watching it at all times,” he said, adding that Domino’s would need to avoid “random hazards [such as] power lines, moving vehicles, children in the backyard playing”.

In the US, the FAA has announced that drones will be permitted for deliveries from August 29, but such deliveries will not be able to cross state lines or fly above members of the public. The latter would appear to be as much a hazard to potential deliverers as New Zealand’s ‘keep it in sight’ rule!