At a sizable number of restaurant chains, chicken is the new [1] taste treat, [the new profit center, or [3] both of those? Three should be your choice, if you’ve been paying attention to something that has truly become a trend in recent months, according to a recent CNBC report.

There are. the channel says, crispy chicken chips, taco shells made out of fried chicken, plus chicken flavored with honey mustard or sriracha — and that’s just in the past few months.

The top 250 restaurant chains added some 325 new chicken items during the 12 months ended June 30, according to research from Technomic. For comparison, only 73 new beef items were added in the same period.

The trend reflects consumer cravings for healthier, high-protein meat, not to mention a decade of high beef prices, which made chicken more appetizing for the companies’ bottom line.

Since chicken can be healthy or indulgent, it can please a wide spectrum of diners, said Mark Kalinowski, a Nomura analyst.

The new products are also aimed at bolstering sluggish sales, with chains looking to innovative, new products to create buzz and drive traffic into restaurants.

Consumers may have heard of Taco Bell’s Cheetos Burrito or the Naked Chicken Chalupa, which features a chicken “taco shell.” However, they may not be familiar with the Mexican food chain’s latest test: Crispy Chicken Chips, which are wedge-shaped chicken tenders.

“Taco Bell clearly wants to figure out innovative ways to use chicken to its advantage,” Kalinowski wrote in a recent research note. “Taco Bell’s heritage of innovation continues. And with Taco Bell likely to become more relevant to investors once Yum China is divested from parent company Yum Brands, it’s good to keep an eye on ‘the Bell.'”

“[Brands] want to delight consumers in a way they haven’t expected,” he told CNBC. 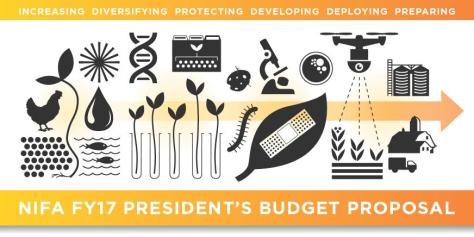 The USDA has awarded $30.1 million in competitive grants to fund 80 research projects to improve food safety, reduce antibiotic resistance in food, and increase the resilience of plants in the face of climate change. The grants are made possible through USDA’s Agriculture and Food Research Initiative (AFRI), the nation’s peer-reviewed grants program for fundamental and applied agricultural sciences.

In addition to the awards, Agriculture Secretary Tom Vilsack and Dr. John P. Holdren, President Obama’s Science and Technology Advisor and Director of the White House Office of Science and Technology Policy, announced that the President’s 2017 Budget will invest a total of $700 million for AFRI, the fully authorized funding level established by Congress in the 2008 Farm Bill.

In the seven years since AFRI was established, the program has led to discoveries in agriculture to combat childhood obesity, improve and sustain rural economic growth, address water availability issues, increase food production, find new sources of energy, mitigate the impacts of climate variability and enhance resiliency of our food systems, and ensure food safety.

“In the face of diminishing land and water resources and increasingly variable climatic conditions, food production must increase to meet the demands of world population projected to pass 9 billion by 2050,” said Secretary Vilsack. “Funding in research to respond to these challenges should be considered as an investment in our nation’s future, an investment which will pay big dividends in the years to come.” Since its creation, AFRI has been funded at less than half the levels established in the 2008 Farm Bill, and USDA has only been able to fund one out of 10 research proposals presented.

While grants awarded to universities, non-profits, community groups, businesses, foundations, associations, and federal agency and international partnerships have led to significant achievements that address critical issues related to agriculture, food, the environment, and communities, thousands of innovative research proposals have been left unfunded.

“Science, technology, and innovation are essential to meeting virtually every challenge our Nation faces, which is why the Administration has consistently supported increasing Federal investments in R&D,” said Dr. Holdren. “Further strengthening our investments in agricultural research will be essential for U.S. farmers to be able to keep the Nation’s food supply abundant, healthy, reliable, and sustainable through the 21st century. That’s why the President’s forthcoming 2017 budget request doubles funding for the Agriculture and Food Research Initiative to the full authorized level of $700 million.”

AFRI grants are administered by USDA’s National Institute of Food and Agriculture (NIFA), which is making the awards through funding provided in fiscal year 2015. NIFA is awarding $15.1 million to fund 35 projects in AFRI’s Food Safety area, focused on enhancing food safety through improved processing technologies, effective mitigation strategies for antimicrobial resistance, improving food safety, and improving food quality. $3.4 million of this funding will be used to address antimicrobial resistance throughout the food chain.

Since 2009, more than $82 million in food safety research and extension grants has been awarded through AFRI.

NIFA is also awarding $15 million to universities, laboratories, and research organizations to fund 45 projects in AFRI’s Plant Health and Production and Plant Products area. These grants focus on plant breeding for agricultural production; plant growth and development, composition, and stress tolerance; and photosynthesis and nutrient use in agricultural plants.

Since AFRI’s creation, NIFA has awarded more than $89 million to solve challenges related to plant health and production. Additional grants for studies and outreach that address plant protection against microbes, insects, and weeds will be announced later this year.