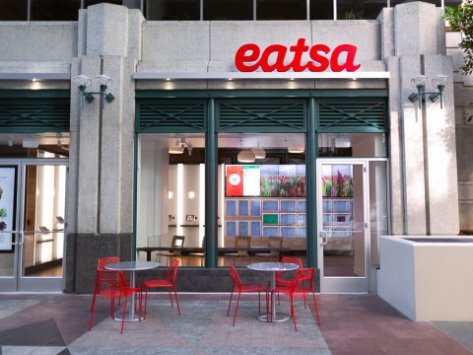 A story last month (February) in Business Insider described Eatsa, a new restaurant chain. as “unlike any fast-food chain we’ve seen before.”

The reporter, Hayley Peterson, who appears to be, in her photo, in her youngish thirties, clearly was using the ‘royal we’ – speaking as one as if she were, like the queen, somehow greater than the sum of her parts.

But then, no one of her generation ever had an opportunity to see Eatsa’s spiritual and practical predecessor, because Horn & Hardart, shut down its last New York City Automat in 1991 – a fact that Haley later alludes to in her well-done, highly-illustrated article.

Horn & Hardart, which opened its first restaurant in 1902 in Philadelphia, quickly caught the public’s attention for a couple of reasons. Its several walls of shiny glass-door compartments held individual portions of sandwiches, salads, desserts and more. Combinations of nickels (five-cent pieces) would be deposited in a slot by each door featuring a desired item. The door would unlock, and the item became yours!

On one side of the usually-large rooms – some seemed to be nearly the size of Rockefeller Center’s ice rink – there were steam tables where hot dishes were available. Whether you stopped by the hot tables or skipped them, you sat wherever you wanted – beside whomever happened to be there – and tipping was discouraged.

There was, after all, no service: You could enjoy a pretty good ‘fast food’ experience – this was, in fact, the nation’s first true fast-food restaurant chain – without once interacting with a person, with the possible exception of a ‘nickel thrower’: A woman who exchanged your larger coins and/or bills for their value in nickels.

The food was prepared either behind the scenes on the same location or at a central commissary elsewhere in either New York or Philadelphia, the two principal cities where Automats operated. The food was, by standards of the day, healthy and nutritious, and ordinarily pretty tasty, too.

So what happened to the Automats – which, by the way, were based on an earlier automat concept in Germany? A couple of things: The arrival of McDonald’s, Burger King and local variations on the same theme(s) provided a more ‘exciting’ atmosphere and, significantly, drive-thrus. At the same time, in the late- ‘60’s – early ‘70’s, as food costs rose, there weren’t a lot of things that could be offered for a combination of nickels.

Then there was the rent factor: For obvious reasons, Automats tended to located in high-traffic locations. Horn & Hardart at one time operated 40 of their restaurants in New York City, and as the rents rose – as they seem to do with tide-like regularity in ‘The Big Apple,’ their share of overhead, coupled with the higher food costs, made Automats economically unviable.

A company calling itself Bamn! attempted to revive the concept in New York City’s East Village in 2006.  It survived a mere 2.5 years – probably, in part, because the street it was on, St. Mark’s Place, has been ever-more ridiculously pricey real estate since the 1960’s, when it was a popular draw as home to Gerdy’s Folk City, when ‘folk music’ was all the range, then to clubs of more advanced genres, and, for a while, to one of NYC’s hottest jazz clubs – frequently inhabited by Thelonious Monk – and the kid of gift/memento stores tourists flock to.

(I often ‘hung’ there when Monk was in residence – selling nonsense poems written on bar napkins to tourists!)

Eatsa is a truly modern-day version of the automat-type restaurant. It’s brightly lit, it’s décor is plain but in tune will Millennials’ tastes. 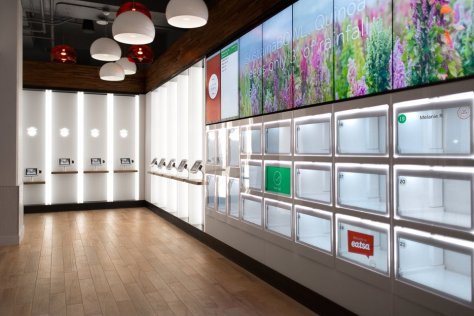 It’s computer-based ordering system – for the sole specialty, a bowl of quinoa priced at $6.96 and topped with whatever the customer orders, from a wide range of choices – is recorded and stored so when a customer returns, his/her previous preferences are  displayed and alternates are suggested as part of the approach to encouraging repeat visits.

So far, there are Eatsa locations in Los Angeles and San Francisco. Nation’s Restaurant News has reported that the chain plans to open at least ten more locations this year.

From that, point who knows? 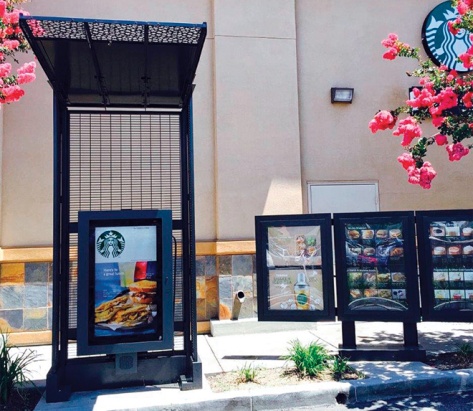 One of the winners is a 46-inch outdoor display Starbucks is using to simulate, at its drive-thrus, the over-the-counter, face-to-face experience customers get inside their stores.

The magazine’s explanation for why this entry won: “The enormous outdoor display accomplishes two things that have long been elusive in the limited-service industry: It’s dynamic and attractive, but also tough enough to install in any location. More impressive, though, is the Facetime-style feed that creates a personal connection between customer and employee, allowing Starbucks to engage on a more personal level with guests.”

Almost at the opposite extreme – in that it removes the face-to-face interaction between server and patron – is iPourIt Inc.’s self-serve beer and wine tap system, which allows customers to pull their own pints (or glasses of wine) while the one-time server serves other customers, and the restaurant’s owner reaps the rewards of a more efficient and more productive operation. The self-served servings are, of course, metered, so the customer is billed, as usual, for what’s been ordered – ‘self-served’, in this instance.

The magazine says the iPourIt system “also gives [operators] a fun and interactive way to introduce alcohol to their in-store experience.”

Sure to be popular with Millennials and others who seem perpetually attached to their smart phones is Domino’s Emoji Ordering system that, QSR says, “takes all the hassle out of the ordering process” – particularly for people who habitually order the same thing.

All guests need to do, the magazine says, “is set up an online account through Domino’s and then save an ‘easy order,’ and from then on they will receive that order any time they tweet or text the pizza emoji to the brand.”

Another perceived advantage is that the system “cleverly lets customers order and interact with the brand where they spend an increasing amount of time every day: On their smart phone. Besides,” they add, “who wants to go through the trouble of dialing a phone number anymore?” (Duh! That’s why people store numbers in their phones!)

Oh, and it you want to break the routine and order something aside from the usual, this system won’t be of much help.

Among the balance of the eight winners, the one that strikes us as most useful – and beneficial, cost-wise, is SCA Americas’ Tork Expressnap Drive Thru Napkin Dispenser. It delivers a set quantity of napkins through a drive-in window at the touch of a button – serving to save the drive-thru employee time, prevent them from grabbing fistfuls of napkins that, facility owners surely know, often are wasted and always are costly.

The winners’ list also included an app-based system to allow passengers passing through Atlanta’s airport to order on the fly, as it were, while standing in a security line or somewhere else removed from the source of what they want to eat; An e-learning ‘academy’ “through which both hourly employees and area directors are learning about the culture, standards and core processes driving the [Newk’s Eatery] brand [in Mississippi]”; HMR’s Vuze Table Location System, which lets the likes of McDonald’s – an initial user – use a guest tag and radio frequency identification (RFID) technology to learn exactly where customers are so orders can be delivered right to them, and a point-of-purchase software program designed to provide full-color renderings of individual restaurants’ interiors, allowing for the prioritizing of merchandising elements in a way that, QSR notes, “maximizes the potential of each poster, decal, banner and more within the dining room, the front counter area, the drive-thru and the store’s exterior.”

The magazine notes that while POP has never been an exact science, this system gets pretty close to offering one.

This is, of course, but the latest step in the homogenizing of America, enabling restaurant operators to have their facilities as indistinguishable as hotel rooms – and town approach-roads – have long been.

There are those who’d say this trend is not in anyone best interest. 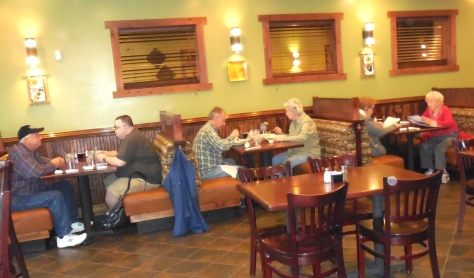 What’s trending – or likely to be this year – in the U.S. restaurant industry? Marina Mayer, Editor-in-Chief of Refrigerated & Frozen Foods magazine, has some thoughts on that. Early last month, she published them.

Before taking over as Editor-in-Chief of Refrigerated & Frozen Foods, Marina Mayer spend four years as managing editor and executive editor of Snack Food & Wholesale Bakery and Dairy Foods magazines. I wrote for the latter, and a predecessor of the former, in the 1980’s.