The good news is, fast- and medium-speed feeders are flocking to veggies and giving less emphasis to their traditional greasy, not-very-healthy mainstays. The not-so-good news is, unless restaurant operators pay a lot of attention to what they’re doing, they risk losing a higher-than-they’re-used-to amount to spoilage and/or expose their customers to veggie-borne illnesses, often spread through improper washing at or very near the point-of-preparation.

“We’re going to see culinary treatments of those vegetables in ways that bring out their flavors without adding a lot of other things to it — so keeping things as natural as possible. Upping the percentage of vegetables in your diet — [it] is part of our job to help you with that.”

Ironically enough, Kish brought up the rise of vegetables at an event promoting the launch of the chain’s new and improved bacon. However, in the modern chain-restaurant landscape, meat and vegetables are increasingly living in harmony on menus.

While Panera isn’t ditching meat, it is working to add more vegetables across the menu.

Kish says that Panera is aiming to balance meat-centric options, like a bacon-turkey sandwich, by packing more vegetables into the dish.

On the other hand, Taco Bell, a chain hardly known for sustainability and nutrition in the way that Panera is, has a slightly different approach that’s similarly packed with vegetables. The Mexican chain emphasizes customization, and customers’ ability to make almost any dish meat-free.  Last year, Taco Bell debuted a vegetarian menu certified by the American Vegetarian Association, which allows customers to substitute beans and rice for meat in most menu offerings.

“Vegetarian has been really big for us recently,” because of its relevance to millennials, Taco Bell’s dietitian and product developer, Missy Nelson, told Business Insider earlier this year.

Even less vegetarian-friendly chains are realizing that vegetables may be key to success. While once iceberg lettuce and tired tomatoes were accepted as a forgettable garnish at chain restaurants, meat-centric chains are doubling down on veggie quality.

Both Chick-fil-A and McDonald’s have ditched iceberg lettuce in recent years. Instead, the chains are testing vegetables such as kale and broccolini.

“They didn’t feel iceberg lettuce was a nutritious green, and they didn’t feel good about eating it in a salad,” McDonald’s corporate chef Jessica Foust told Business Insider in July.

Why are fast-food chains investing in vegetables, something that has long been seen as antithetical to their existence?

Part of the reason is customer demand: While only about 3% of Americans identify as vegetarian or vegan, an increasing number of people are cutting meat from their diets. According to a 2015 study, 26% to 41% of Americans report that they cut down on the amount of meat they ate in the past year.

Adding more vegetables to the menu is a great way to appeal to the average American, who may not be committed to a 100%-meat-free lifestyle, but wants to dabble in more veggie-friendly diet.

However, there is also a hidden financial bonus to focusing on beefing up vegetables offerings. Vegetables typically cost less than meat, meaning that adding more vegetables to a dish can provide a cheaper way to fill up customers.

Chefs Roy Choi and Daniel Patterson have made headlines with the concept Loco’l, where they’re doing a lot of experimenting with veggie burgers. The concept provides healthy meals at fast-food prices by cutting costs by doing things such as adding more grains and vegetables to chain standards like burgers. Customers fill up faster, and the company is able to save money while also providing a healthier meal.

As old-school chains explore their vegetarian options, Loco’l isn’t the only new concept banking on vegetables.

By Chloe aims to offer unexpected vegetable options that nonvegans will enjoy.

By Chloe, a new 100%-vegan chain, only opened its first location a year ago, in New York City.

Now the chain has a location in Los Angeles opened in partnership with Whole Foods 365, a recently opened sweets shop, and several more new locations in development. On Friday, the chain announced it was adding two new vegan contributing chefs to the organization, Jenné Claiborne and Lauren Kretzer.

By Chloe doesn’t offer any meat or meat-byproducts on the menu. However, the vegan chain has some surprising similarities to fast-food chain in its approach to vegetables.

According to the company, more than 80% of customers are not even vegetarian. In fact, a number of customers don’t even realize that the concept is vegan when they order their food.

This notion, that vegetable-based food is appealing to nonvegetarians, is the very same idea responsible for the rise of vegetables in fast food. In 2016, veggies aren’t just for vegetarians — they’re also for all types fast-food lovers.

But veggies do require different, and sometimes greater, care and attention than tried-and-true (but losing favor with consumers) traditional meat-based menu items. Where the latter can be taken in and held frozen until just before they’re needed, veggies don’t often deal well with extreme cold, and some don’t hold up for long enough periods of time in kitchen levels of heat.

Sure, new veggie based menu items offer opportunities to please customers in different ways. But they present challenges, too.

Brooks Headley. a famed pastry chef before shifting – “because it was fun” – to some of the most attention-getting (and best) restaurants in New York City . . . then threw it all in to make and sell veggie burgers. Why?

In an interview with Lucky Peach’s Peter Meehan, Headley explained why he traded in white table cloths for disposable plates and isn’t looking back.

The tension between staff and diners bugged him: “I’m guilty of saying, ‘Only rich people eat at fancy restaurants,’ which isn’t true … But while it isn’t necessarily all hedge fund guys, fine dining is for very wealthy people and for normal people pretending to be rich for the night … Either way, a $400 meal for two is pretty grotesque. And the whole ‘we just want to pamper you and pretend to care about you while seething and hating you behind the scenes’ service style is the worst.”

He hates the awards circuit: “I think Michelin is the biggest crock of complete fucking bullshit — and please quote me exactly on this — especially in New York City. They lied about stuff they ate at Del Posto [a reinvention of Italian cuisine by co-owner Mario Bateli]. But when you’re in that world, it becomes something you strive for: lists and awards. It’s part of the deal. Awards and lists are only really good for the second they’re accepted, and then everything changes.”

He can serve the same great ingredients for much less money: “That’s one of the things that always bummed me out about working in fancy restaurants: the cost … We’ve figured out a way where I can go to the market and buy a bunch of ramps from Rick Bishop and a bunch of sunchokes from Franca Tantillo and asparagus from Stokes Farm, package that, and sell it for five bucks. I’m buying the same stuff as all the fancy restaurants in town. They’re selling it within the context of a tasting menu or a $35 entrée. We’re selling it in a little paper boat for $5.”

The best part of fancy restaurants was buying great stuff and watching people enjoy it, which Headley can still do: “I never planned to work in fine dining restaurants; I went with it because it was fun. I got psyched the more I did it. I could go to the market and buy four flats of the greatest peaches in Washington, D.C., make food with them, and serve it to people. That part has always been exciting, and I still get to do it.”

A cheaper restaurant is just way more accessible: “People can visit New York for fancy restaurants, but a twenty-year-old is not going to pop in to Le Bernardin. But they can come here and spend ten bucks on lunch and twenty on a record — it’s more important for me to be part of that New York City.” 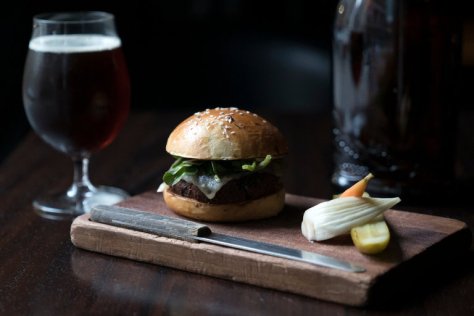 When a laudatory 1,300-word article is published about you in The New York Times, it’s a pretty good bet you’ve ‘arrived’ – long after the likes of well-liked blogger Vegan Miche began singing your praises.

‘You’, in this instance, is the veggie burger – a contradiction in terms that, hardly surprisingly, appeals to many carnivores as well is vegetarians, vegans and other special-diet followers.

The Times noted that, until relatively recently, the veggie burger was “a culinary nobody, mushy and maligned. But when a chef as decorated as Daniel Humm turns his attention to perfecting a veggie burger, the signal is clear: That second-fiddle vegetarian staple has arrived.”

Mr. Humm has a restaurant in Manhattan called Eleven Madison Park. It has three Michelin stars, so it’s a pretty good bet his “carefully constructed” version veggie burger – it uses grains, fresh vegetables, quinoa and lentils “to replace the texture of meat,” he told The Times – also employs “eggs, cream cheese and Dijon mustard to hold it together.”

He added that, “Nothing goes into the burger that doesn’t serve a purpose.”

His mission was to make this item “to be able to stand next to our beef burger and our chicken burger, not be a dish we just put on the menu for the sake of it,” he added.

He offers it up at his NoMadBar, which is steps away from Eleven Madison Park.

After decades as an amateur player eager for a big break, the veggie burger has made its ascent, becoming a destination dish and hashtag darling as never before.

The newest generation of veggie burgers has moved from the edges of the menu — at best an interesting challenge for chefs to tackle — to its center, a dish to offer not just for the sake of meat-avoiding customers, but to make memorable in its own right. To do that, they are turning to a vast arsenal of ingredients and techniques to get the flavor, texture and heft they’re seeking.

April Bloomfield created a veggie burger inspired by soondae, a dark Korean blood sausage commonly stuffed with noodles, rice or vegetables, to serve at Salvation Burger, which is set to reopen this fall after a fire damaged the kitchen. (Her version is made with sweet-potato noodles, lentils, carrots, carrot juice and garam masala.)

Chef Brooks Headley, formerly a pastry chef at Del Posto in New York, has a restaurant, Superiority Burger restaurant in Manhattan’s East Village, that is built around his veggie burger, “arguably the most acclaimed burger of any kind in New York recently,” The Times said.

The Times article went on and on, and included links to an assortment of veggie burger recipes. They did a good job of highlighting what an increasing number of people will be striving for as they increasingly build ‘healthful eating’ into their lifestyles. (Butchers, beware!)